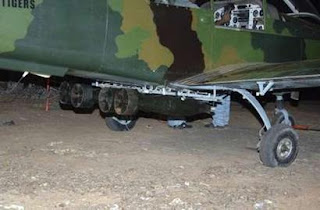 Posted by voiptocalls at 3:14 AM No comments:

After successful production of the Z-26 aircraft family, the Czechoslovak aircraft Moravan, began design of a new family of training aircraft, known as the Z-40 family. Unlike the previous tandem-seated aircraft the Z-40 family featured a side by side cockpit. It was available in two basic variants, a two seat trainer, the Zlín Z 42, and a four seat aircraft, the Zlin Z 43 capable of being used both as a trainer and a tourer.

The resulting design is a single engined low wing monoplane of all metal construction and a fixed nosewheel undercarriage. The Z 43 shares 80% of its structure with the Z 42, but is fitted with a revised fuselage accommodating a four seater cabin and a more powerful engine. The Z 43's wings are of greater span and do not have the slight forward sweep of the Z 42.[2]

These aeroplanes are excellent training aircraft in respect to their abilities starting with private pilot, commercial pilot, and instrument rating training, and ending with full aerobatic capability. They are very good for military use or flight school operation; but in field of general aviation they cannot compete with the simpler and lighter Cessna and Piper aircraft.

Pictures released by the Tamil Tigers in Sri Lanka indicate they operate Czech-built Zlin Z-143 single engine, four-seater light aircraft modified to carry four bombs mounted on the undercarriage. It is not clear whether the Tigers have extensively modified the aircraft, which military sources believe may have been bought from a source in South Africa and Czechoslovakia.[citation needed]. The Tiger "Air Force" carried out a 9/11 style suicide attack on February 20, 2009 using two of these aircraft. Under heavy anti-aircraft gun fire one of these aircraft was crashed into a tall buiding in Colombo and the other shot down near an airbase.

The Z-143 has a maximum speed of 265 km/h (162 mph) and as such it makes it a relatively difficult target to detect and intercept by a force that lacks airborne early warning or an extensive defense radar network when the aircraft is flown at low level. However at around 4am on 9 September 2008, the Sri Lanka Air Force reportedly scored its first air to air kill by successfully intercepting and bringing down an Air Tigers Z-143 over Mullaittivu.[5]. The last two aircraft were shot down over the Colombo and Katunayake skies between 10PM to 11PM on 20 February 2009 by Sri Lanka Air Force.Tamil Tiger planes raid Colombo - BBC Pictures of the crashed Z-143 can be seen at this link[1]